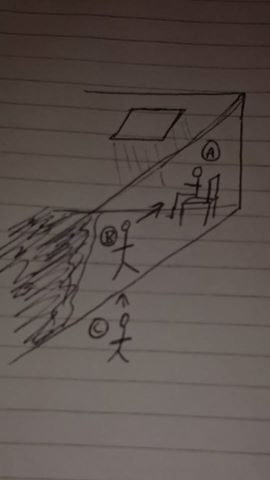 When I try and see what it’s left, right etc from position C all I can see is what I have drawn (it’s like it’s all in front of me and there is nothing else around me)

This is a classic “boundary violation of associated identity” where the person “sees themselves.” This is often confusing to people trained in models such as NLP where associated/dissociated is a common distinction.

When it comes to things like memory, we can be either associated, i.e we see it through our own eyes, or dissociated, i.e. we see ourselves in the memory and we see it as though we are an observer.

The structure of memory is interesting in that it may possess movement of time, in that it is a movie, or it may be a snapshot in time, as in it’s a still picture. Memory can also be contextualised, in that it may have a boundary or border around it and it may be two dimensional and so on. NLP trainees will be familiar with the submodality distinctions of memory.

“Metaphor” however is characteristically different in that metaphor extends infinitely in all directions. It is never confined within a contextual boundary or confined within a submodality distinction. As a result we can never be dissociated from our metaphoric experiences, we are always in an observer position and never see ourselves.

For example, one chap sat in front of me told me with quite a level of self assurance, “I’m dead. I have no life, my life is over.” He told me those things as though this was the absolute truth.

When I asked how he knew this, he told me that he saw himself in a coffin.

And here is where the magic starts to happen. For so many people, they have never actually considered who they really are, they have always assumed themselves to be the person other people have told them to be. They see an externalised concept of themselves and assume something like that is them reflected back at them.

In this instance, the person sees themselves seeing themselves (it is not a double dissociation in NLP terms), but from the position of the real them, the observer, they have no body.

So he is a nobody. But he sees himself as being a somebody, but that somebody isn’t really him. He is at a distance from that somebody that he isn’t.

So he lives like a ghost, a spook. He is also an outsider. Maybe he wants to come in from the cold. But at least he is free. The false “self” that sees is trapped, a prisoner, contained.

He is quite transparent about it all though, even if he doesn’t realise it himself. This room he looks at is possibly one of his regular haunts. It’s a place he goes to to try and find himself.

This is common with actors and other lost souls. And many people are actors even if they’ve never considered working on a stage. They spend their lives pretending to be some body else, for reasons noble or otherwise.

One of the problems faced by a person in such a situation is that they are never really fully present, there is always a big part of them missing or absent. It is like they are an observer, but never a participant. They may regularly feel that weird dissociation experience as though they are not sure they are reaming, and need to pinch themselves to see if they are awake.

They may also crave danger and risk to try and get the feeling of being alive, to feel something, anything. Otherwise life for them lacks any feeling.