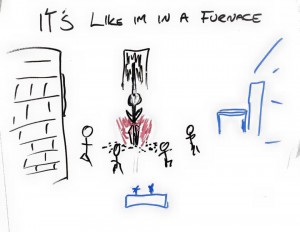 Clinical/hospital setting. Person is tied with hands behind their back to a pole and the flames/heat is rising up. Behind is a door. To the right is a brick wall and on the wall is a blank whiteboard.

To the left is an operating table with a small closet.In front is a room with a big sink with taps on it. The people in front of him are in disagreement. Below is gravel and above its just white but it’s not a ceiling.

This is a situation that has a lot at stake, there seems to have been a bit of a witch hunt and this really is a matter of life or death. If only he was free enough to be able to change his position on things, everything could be different. It’s the kind of situation that would get a guy all hot and bothered, he will find himself burning up, getting quite hot under the collar.

When he thinks about what is right, he draws a blank. It just all seems a bit bored. The writing is not on the wall for him just yet though.

Because when he looks at what is left for him, there may be some operations that can be brought to the table. But there may be a skeleton or two in the closet waiting to surprise everyone. Our man may suspect that someone is hiding in the closet.

If he were free to do so, he could hot foot it out of there and move on from all this bother. He would be able to wash his hands of this situation and cool down. His hands would be clean.

He looks forward to a disagreement, especially as he is the one who has been condemned in this situation.

Looking at this from a metaphoric taxonomy perspective, we can be sure that even though this situation itself may be a recent event, we can know that this is a recurring feature in the client’s life and that he has felt this way for much of his adult life (container metaphor).

What is interesting is the feature of both the fire and the sink. This issue is about “not shame”, all of the features in the metaphor are an antidote to shame (which would be contamination metaphor). Thus, the emotion that this client experiences in these situations arises so that he doesn’t feel shame.