Danny posted  a metaphor on the FB page, I thought it might be interesting to play a little with it. 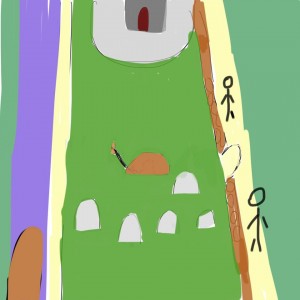 The metaphor: ”I’m stood upright, in a red velvet lined coffin (no lid), which itself is stood upright in a graveyard. Only my head and shoulders are above ground level. My left wrist is bound with a leather strip tied at the other end to a wooden peg in the ground. The graveyard is on a hillock. There are lots of gravestones behind me in each direction, and beyond the graveyard, countryside. My upright grave has no gravestone. Directly ahead, and down the hillock is a gravel churchyard and a church. To the left is a towpath, a canal (with a few barges) and countryside. To the right is a stone wall, with an open gateway adjacent to my grave, then a country lane with a couple of walkers and then countryside.”

Overall, this is a very common metaphor, although it can take many forms. This is the archetypal “living death” metaphor. i.e. “I don’t have a life,” “my life is over”, “I’m as good as dead”, “My life isn’t worth living.”

This is quite common following a major loss event or series of events. It is also not uncommon with traumatic events when the casualty reports, “My life ended that day”, “I’ve had no life since then,” “I’ve lost everything, I’m lifeless” and so on.

If we look at the taxonomy of the metaphor there are a number of categories.

Container Metaphor: The red lined coffin (red is the only colour mentioned in this metaphor, so has symbolic significance). So, we know that this isn’t a new problem, but rather has existed since childhood. We also know that this is about the client’s family of origin.

If we add this to the element of bodily position, we can say that the client stands up for himself when it comes to his family, but he still doesn’t have much of a life.

Elevations: The coffin and graveyard is elevated on a hillock. This suggests that there is an elevated status [of the family] but not necessarily so for the client within the family.

If we add this to the missing gravestone, we can suggest that he doesn’t have the family name to identify his position.

Attachments: The leather strip bound to the left wrist (which in turn is a container metaphor) and attached to a peg in the ground.

We know that this client is very attached to this place. He’s going to be very reliable because we always know where he stands. This isn’t a man who changes his position readily. This attachment has existed since childhood (as revealed by the container element) and he’s always had a hand in it himself. Being a place for the dead, it could be suggested that this attachment is not at all healthy.

I would be left wondering if this client is haunted by ghosts from his past.

We know that the client looks down on the church, but there is also something about the church he looks forward to.

Now, if the client were to go with what is left for him: assuming he couldn’t get over it (the canal), then this would be something in which he’d need to immerse in order to cross himself.

There’s a degree of inevitability about this, and this is something he’d have to go through in order to cleanse himself of all that he’d have right behind him. He may have to barge past a few things that may get in his way, but if he lets them go with the flow, things will soon be clear to him.

It would almost be like being born again, a different kind of baptism, but the church would have no hand in this. They would regard this as taking the “left hand path” commonly associated with the antichrist.